I see these things everywhere. A new fad I guess. Everyone has a “Bucket List”. Everyone wants to do this, that or the other thing. Most of the time I would say, well, stop making lists and start doing these things. A bucket list gets you no further in completing the list other than wasting some more time writing it down so other people know what you haven’t done and will probably never do. But. Yes, always a but. I figured what the heck, may as well join the crowd this one time in my life, so here is mine – and don’t get me wrong, there are some interesting ones out there and I do have to admit, I read a lot of them and many seem very well thought out. Not dissing the list, just putting my unasked for and probably unwanted thoughts out there, and joining the crowd in my own criticism. OK, here it is:

36) Somalia
37) Go back to Bangkok …unless I live there, this will always
remain on my list. The greatest city in the world. I’ve been
there 5 or 6 times and always try to make it back if I’m in the
area.
38) Live in a foreign, non-western, country for at least a year
39) The South Pacific. Tahiti, Rangiroa, Bora Bora, Samoa,
Kiribati, Fiji …too many to name.

Another thing with the Bucket List, thinking about an older post. Sometimes you don’t know you want to see or do something …until you actually see or do it. Most of the things I’ve done or seen have been spur of the moment types. The Bucket List becomes oxy-moronic in this sense, especially in regards to travel and adventure. Travel and adventure for me is spontaneous, spur of the moment and definitely not planned. Putting together a list is planning. Blah. I would never put “Swim with Hippos” on my list, but heck, one of the most adventurous, exciting, as well as stupid things I’ve ever done. Wouldn’t take that back for anything. Watching slaves be marched in, bought and sold …Bucket List moment, absolutely not, but my God I’m glad I saw that and am aware of it now. Staring down pirates, holding an empty AK …bucket list, no. Awesome, gotta say, yes. Child soldiers. Glad I met them and talked to them. Wish it wasn’t so, but it is. Bucket List. Heck no.

So, a little tougher to make than I thought, and kind of enjoyable actually. Definitely an interesting exercise in wants and goals too. … and if anyone wants to invest, these Junk Boats are expensive – send me an email. 🙂

Brought to you in part by Baby Bruti Productions

1/3 million plus and counting… 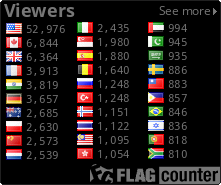